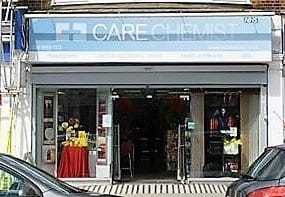 Our Private Microsuction Ear wax Removal Clinic in Edgware can be found inside Care Chemist at:

You will find us in between WH Smith and the Halifax and opposite Cafe Broadway and Mill Hill Fonehouse. The pharmacy is about 2 minutes walk from Mill Hill Broadway station. Our clinic is in one of the comfortable consulting rooms located on the ground floor at the back of the pharmacy.

You can find our Ear Wax Removal In Edgware on Google Maps here.

You can get directions to our Ear Wax Removal Edgware Location here.

In North London EN5, we have our Microsuction Ear Wax Removal Barnet Clinic.

Due to high demand, private ear wax removal is by appointment only. You can book an ear microsuction appointment here, or click on the Book Now button below:

There is usually pay by phone on-street parking available outside for up to one and a half hours. There is long stay parking nearby at the Mill Hill Broadway station car park.

Edgware is a district of northern Greater London, in the London Borough of Barnet. Edgware is centred 9.5 miles (15.3 km) north-northwest of Charing Cross and has its own commercial centre. Edgware has a generally suburban character, typical of the rural-urban fringe. It was an ancient parish in the county of Middlesex. The community benefits from some elevated woodland on a high ridge marking the Hertfordshire border of gravel and sand. Edgware is identified in the London Plan as one of the capital's 35 major centres. Edgware is principally a shopping and residential area and one of the northern termini of the Northern line. It has a bus garage, a shopping centre called the Broadwalk, a library, a hospital—Edgware Community Hospital, and two streams—Edgware Brook and Deans Brook, both tributaries of a small brook known as Silk Stream, which in turn merges with the River Brent at Brent Reservoir.

Edgware is a Saxon name meaning Ecgi's weir. Ecgi was a Saxon and the weir relates to a pond where Ecgi's people caught fish. Edgware parish formed part of Hendon Rural District from 1894. It was abolished in 1931 and formed part of the Municipal Borough of Hendon until 1965.The Romans made pottery at Brockley Hill, thought by some to be the site of Sulloniacis. Canons Park, to the north-west, was developed as an estate by James Brydges, 1st Duke of Chandos and was the site of his great palace Cannons.

The construction of the M1 motorway across this area made less visual impact than might have been expected owing to the deep cutting in which most of it lies. Some building estates have been planted north of Edgware Way in the post-war period, but they have been largely confined to the area between Edgwarebury Lane and the main railway line. The borough council's Spur Road estate was built only after bitter local opposition; it is dominated by five tall blocks of flats, the first of which, of eleven stories, was opened in 1957.

The Edgware General Hospital is outside the old parish at Burnt Oak, Hendon. The Anglican Convent of St. Mary at the Cross (Sisters of the Poor), until 1931 known as the Convent of St. Mary of Nazareth, was founded in 1865 in Shoreditch by the Revd. H. D. Nihill. In 1873 land was bought at Edgware to the north of Hale Lane, and by degrees the work of the convent and its hospital at Shoreditch were given up. In 1937 a new hospital block, providing 50 extra beds, was opened at Edgware. It is now a home for sick and incurable children, who are taken in up to the age of 18 and then kept for life if they have no other home.

Known to most Londoners simply as the name of a road and one of three final destinations for north-bound Northern Line trains, Edgware marks the northern edge of the suburban sprawl of Greater London.

Historically, it was a small town located along the Roman road between London and St Albans, a notable curiosity being that the place comprised of not one parish but two, the boundary being the road itself. Even today, with the area having been developed out of all recognition with the coming of suburbia between the two world wars, this sense of division can still be observed, for Edgware on the eastern side of the old Roman road is part of the London Borough of Barnet, while on the western side one finds oneself in the London Borough of Harrow.

What you call that old road, nowadays part of the A5, depends very much on whereabouts in London you are - in Edgware, it's simply the High Street, and does not actually become the Edgware Road until close to Marble Arch.

One brief historical note: Fans of the eighteenth-century composer Handel may be interested to note that he lived in Edgware for a short time; he performed on the organ in St Lawrence's Chuch on Whitchurch Lane, and nearby Canons Park once housed a mansion built by one of his patrons, the first Duke of Chandos. Praised by Defoe and satirised by Pope, that building was demolished long ago, with the pillars at the entrance to the exclusive Canons Drive still standing as reminders of a bygone age.

To the north of Edgware you will find Elstree and Borehamwood, while to the west you will find Stanmore. South of Edgware is Queensbury, while southwest of Edgware is Harrow and Wembley. To the Northeast is Barnet, and to the East is Finchley. Within the boundaries of Edgware are Burnt Oak and Colindale, while on its eastern side, Hale Lane joins Edgware with Mill Hill.

Mill Hill is a mostly residential area in the borough of Barnet, with Edgware to the west and Finchley to the east. The Broadway referred to in the station's name is a pleasant local high street that stretches away to the east, with plenty of independent stores as well as a few big-name shops and restaurants. A little further west, a cluster of green spaces - Mill Hill Park, Arrandene Open Space and The Mill Field - provides some balance to the local shops and housing.

Many people in North West London are finding that their local GP surgery no longer offers ear syringing. No doubt this is partly due to a lack of funding, but also because ear syringing is inherently less safe than ear micro suction. Possible side effects of ear syringing or irrigation are ear infection, hearing loss, tinnitus, perforation of the ear drum, and further impaction of the ear wax (i.e. the ear wax gets pushed even harder against the ear drum). Is it any wonder that people are going off walk in ear syringing in London and are seeking out microsuction ear wax removal instead? Unfortunately, the sharp rise in demand has meant that NHS micro suction clinics are now unable to meet the need and waiting times are often over two to three months.

You no longer need to wait months for micro suction. Why not save time by going private? It's not as expensive as you think. Simply head to our booking page and you could be saying goodbye to your wax blockage this week!

Following the latest guidance from our professional body, we have now reopened. For our full announcement, please CLICK HERE.